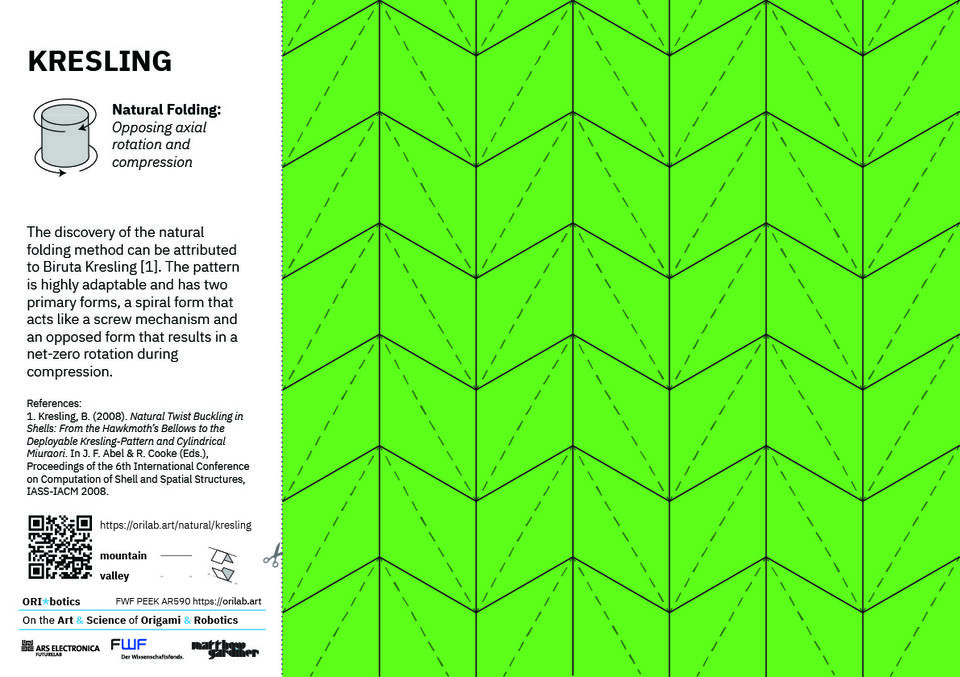 The Kresling-ori was discovered and studied by several researchers. However, the discovery of the natural folding method can be attributed to Biruta Kresling [1]. Her technique involves applying opposing axial rotational compression. One can hold a paper tube and twist it opposite ways while pushing the twists together to spontaneously generate a very accurate Kresling-ori. The pattern is highly adaptable and has two primary forms: a spiral form that acts like a screw mechanism and an opposed form that results in a net-zero rotation during compression. The compliant mechanisms group at BYU, led by Larry Howell, developed a sophisticated surgical guide called ORI-guide to reliably deploy surgical tools through a flexible and compressible Kresling folded tube [2]. Researchers in the Ars Electronica Futurelab have designed a novel oribotic instrument called ori*cordion that uses the Kresling-ori for unique performative qualities not found in other musical instrument designs.


1. Kresling, B. (2008). Natural Twist Buckling in Shells: From the Hawkmoth’s Bellows to the Deployable Kresling-Pattern and Cylindrical Miura-ori. In J. F. Abel & R. Cooke (Eds.), Proceedings of the 6th International Conference on Computation of Shell and Spatial Structures, IASS-IACM 2008.
2. Sargent, B. S. (2018). Using Collapsible Systems to Mitigate Buckling in Thin Flexible Instruments in Robotic Surgery. Brigham Young University.
This work is was produced with funding from FWF PEEK Grant AR590 and presented in the Ars Electronica Center Material Lab as part of the 25th Anniversary of the Ars Electronica Futurelab.